If you are in Toronto August 22-24, 2008 I highly recommend participating in the Yoga Festival Toronto. Over the course of the three days there will be a wide spectrum of heartfelt lectures and focused asana classes. This is the first event of it's kind...grassroots, non-profit, urban retreat style... that explores and embodies the true essence of yoga.

Here are a few wise words on meditation from one of YFT's faculty members:

"Meditation is the realization of one's individual and universal nature which brings freedom from fear and allows the person to live in a state of wholeness and well-being. Meditation begins with a technique, an intentional awareness of outer world, sensations in the body and of one's feelings, emotions, thoughts and experiences. During such practice a person discovers that his/her mind was programmed and conditioned by the society and culture. Later on, meditation becomes spontaneous and effortless, and life itself becomes a meditation. Whatever we think, speak or do, positive or negative, is a meditation because meditation is not a virtue, morals, good behavior or thinking; it is the awareness of all that is."
Posted by Yoga Cowgirl at 11:41 AM No comments: 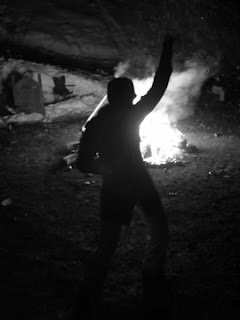 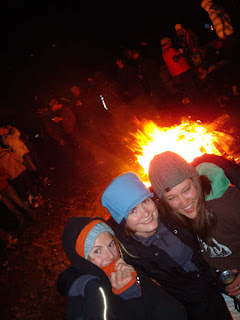 According to my friend Meredith, if it's one party you don't want to miss it's the Last Day Festivities at Shames Mountain, our local ski hill. Well, Meredith was right, this little shaker was a big barrel of laughs ... a chance to connect with old friends, meet new friends, roast marshmallows and bask in the glow of the largest bonfire anyone has even seen underneath a blanket of stars. This mountain culture sure is something special. We breathe the cleanest air, live for powder days and practice our own form of meditation within the serenity of nature. We camped amidst the mountains, evergreen trees, laughed and danced till the wee hours of the morning. It felt good for the soul. The morning dawned ... we rubbed our eyes, strapped on the skis and headed for the hills.
Posted by Yoga Cowgirl at 3:12 PM No comments:

Interested in practicing yoga? Naomi is available to teach private classes to individuals and groups either at your home, business, school or the Treehouse Retreat on Cranberry Lane. Call 250.641.5842 or email naomi@treehouseyoga.ca

Yoga Cowgirl
Terrace, BC, Canada
Small town girl moves to the big city and takes the scene by storm. From building Digital Minds Inc., a digital communications company specializing in interactive 'edu-tainment', to the design, manufacturing and wholesaling of her own clothing label, Ms. Fitz to co-founding Outpost 42, a network uniting artists, musicians, technology gurus and non-profit organizations. Along the way, she discovered the therapeutic benefits of yoga. Today, a Certified Instructor she is realizing her dream of creating a health and wellness centre, Treehouse Studios in the natural environment of north-western BC. Her inspiration stems from a variety of sources including travel and culture, a passion for nature and the environment, and most of all her friends and family.